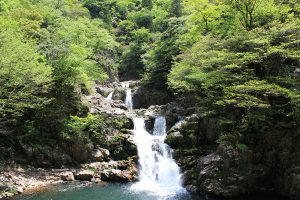 Sandankyo Gorge, Japan’s most beautiful gorge and designated as a national special place of scenic beauty, is a large 13 km-long gorge stretching along the Shiwagi River, a branch of the Ota River.
It contains a number of breathtaking scenic sights that include waterfalls, deep pools and huge boulders. This collection of sights comprising pristine streams and virgin forests can only be described as a work of art created by mother nature herself. Japan has only five gorges, valleys and ravines that have been specified as a national special scenic beauty, and Sandankyo is regarded as one of Japan’s most spectacular gorges. In Sandankyo, you can get on The ferryboat at the point of Kurofuchi and Sarutobi, so highly clear stream can be seen nearby.※The ferryboat service period is from the end of April to the end of November about both ferryboats, and also the service is stopped in the rainy season and on some bad weather’s days.

-About the origins of Akiota-
The name in Akiota-cho originated from source of Ota River which flowing into Seto Inland Sea from capital Hiroshima-city, the City of Water.The abundant quantity of water which supports the life of Hiroshima citizen of 1,200,000, made the wonderful nature, climate and culture that represent Japan to our town such as domestically outstanding nature and most prominent full- scale snow resort that located the center of Western Chugoku Mountain.

-Geography and Climate-
Despite being located in Hiroshima Prefecture (35 degrees north latitude) in a very mild climate zone where it is warm even in winter, Akiota is the southernmost part of Japan to receive heavy snowfalls – snowfalls that reach approximately 3 meters in depth every year. While Hokkaido, Tohoku and Nagano Prefecture are famous ski resorts, Akiota is the town which helped skiing to become established in Hiroshima Prefecture and is therefore called “Hokkaido in Western Japan.” “Osorakan Snow Park” at Mt Osorakan, Hiroshima Prefecture’s highest mountain, is the winter resort which the local townspeople are most proud of. Akiota is just one hour by car from the World Heritage sites in Hiroshima City and Miyajima where the climate is very mild and it rarely snows. Having a large variety of attractions in a region well known for its abundance of snow on one hand but so close to the warmth of Hiroshima and Miyajima on the other is a great opportunity to understand the “diversity” and “culture” of Japan. In addition to skiing, visitors can play in the snow, enjoy snow trekking, and build the very same igloos (ice houses) that the Inuit used to make using snow bricks. These experiences are the very unique and special features that only Akiota can offer.